Get to know the most popular hotels in Northern Cyprus

MAN investment ltd company with its specialized knowledge in the field of hotel reservation can be one of your best advisors in this regard.
With access to the strongest hotel provider systems (B2B) all over the world and the conclusion of contracts and very good business relations with most of the international hotels in North Cyprus, we can act as a professional consultant in the field of hotel reservations all over the world, especially in the country Northern Cyprus is the best choice for you.

Contact us for information and advice regarding your hotel reservation

For your foreign trips, don’t worry about booking a foreign hotel. To travel to any part of the world, you can choose your favorite hotel easily and in riyals from the “MAN” online reservation system. MAN is one of the fastest and most comprehensive hotel booking sites among foreign online hotel booking sites. The MAN foreign hotel online reservation system provides the possibility of booking any hotel, from the most luxurious hotels in the world to mountain huts, rural cottages, and small guesthouses.
Below is a list of the most popular and popular hotels in Cyprus. To see the complete list of Cyprus hotels and know the latest price of Cyprus hotel reservation, click on the search button after specifying the travel date and destination.

Cyprus is an island in the Mediterranean Sea and located in the south of Turkey. After Sicily and Sardinia, Cyprus is the third largest island in the Mediterranean. Although Cyprus is geographically located in Asia, politically it is a member of the European Union and is considered a European country. Cyprus was divided into North Cyprus and South Cyprus in 1973. Perhaps this separation has made Cyprus mix modern history with its most ancient monuments. A look at Korayoun, which dates back to the 13th century BC, is a good indication of this fact. The religion of the people of North Cyprus is Islam and the religion of the people of South Cyprus is Orthodox Christianity.
The crime rate in Cyprus is so low, which makes this island a safe and perfect place for tourism in the sunny Mediterranean Sea. Known as the birthplace of Aphrodite (goddess of love and beauty), Cyprus has many attractions to see and many things to do. Cyprus has grown under the influence of Greeks, Assyrians, Egyptians, Persians, Arabs, French, Italians, Ottomans and British cultures, that’s why they speak English much better than Greeks and Turkish people.
Cyprus has been hosting many tourists from all over the world for hundreds of years and this process has continued until today. Cyprus has one of the most stunning beaches, the roughest blue seas and the most endless summers.

The most popular hotels in Cyprus

The best time to travel to Cyprus

The best time to travel to Cyprus is spring, which usually starts from early February (mid-Bahan). The weather in Cyprus is still suitable in the months of March and April (early May) and you can see beautiful wild flowers and more than 40 species of orchids on this island. The heat in Cyprus starts from May (mid-May) and continues until October (late October). Summers in Cyprus are the best time to watch the sea turtles that are found on the beaches of this island.

Cyprus, this small island, has a rich history. Due to its position, this island has been the place of rule of many empires for many centuries and has been the focus of the powerful people of the Eastern Mediterranean. Even today, many people are attracted to this enchanting island, but none of them seek to rule it, but they want to enjoy the beauty of the beaches of this beautiful island. Most of the tourists who travel to Cyprus are interested in the sea, however, it should not be neglected to mention that in addition to the sea, Cyprus has many other tourist attractions such as ancient monuments, Byzantine churches, monasteries and museums, which are of interest to many tourists. Takes. In the following, we introduce to you some of the best tourist attractions in Cyprus:

To book a cheap hotel in Cyprus, after visiting MAN’s foreign hotel reservation page, select Cyprus as the destination and if you are looking for a specific hotel, you can also type the name of the hotel. To choose the duration of your stay, the solar and Gregorian calendars are provided for you. After choosing the date, it is time to choose the number of adults and children. In this step, you determine how many people are staying in each room. For example: choosing a room for 2 adults and 1 3-year-old child. After completing the details, click on the hotel search button to display the list of hotels.

In displaying the results of Cyprus hotels 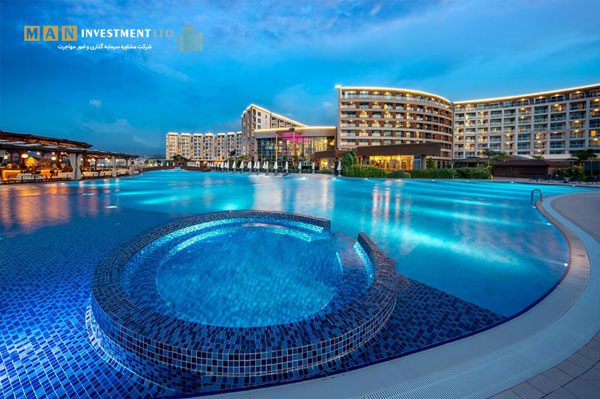